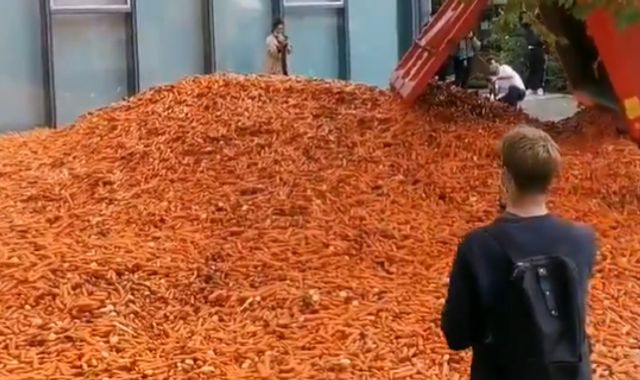 Twenty-nine tonnes of carrots have been dumped outdoors a London college as a part of an artwork venture highlighting meals wastage.

Grounding, a chunk by Spanish-Welsh artist Rafael Perez Evans, was put in by a big lorry outdoors the Ben Pimlott constructing at Goldsmiths School in New Cross, a part of the College of London.

The artist mentioned the greens, which is able to ultimately be collected as animal feed, had been rejected by supermarkets.

Since its set up on Tuesday, many college students had been seen climbing the orange pile to take pictures and a few took carrots house to eat.

“However I knew that is very Goldsmiths, and all that was left was to grasp what it meant,” she mentioned.

In accordance with Mr Perez Evans’s web site, the art work explores “the tensions in visibility between the agricultural and the town”, and was impressed by European farmers dumping produce as a protest.

“The therapeutic strategy of grounding includes doing actions that ‘floor’ or electrically reconnect you to the earth,” he added.

Many college students mentioned they felt torn in regards to the dumping of a lot edible meals, regardless of supermarkets not wanting them.

“Despite the fact that the carrots are being donated to cattle on the finish of the piece, it is nonetheless barely problematic given the poverty, meals shortages and homelessness in Lewisham,” mentioned Lester Langford, 20, who’s from Warwickshire and research historical past.

“It was one thing so enjoyable and weird to go and see… but in addition it is onerous to not acknowledge the obvious issues with meals wastage,” the 20-year-old mentioned.

“Nevertheless, this meals was prone to be wasted anyway… so by utilizing them for this venture individuals are instantly desirous about meals wastage and the quantity that does not make it to supermarkets to be offered.

“It is actually an fascinating solution to acquire consideration for a social trigger.”

London rivals face off to kick off exclusive GameDay coverage

London rivals face off to kick off exclusive GameDay coverage